WHAT DETERMINES THE STRENGTH OF THE US DOLLARS TO OTHER CURRENCIES? 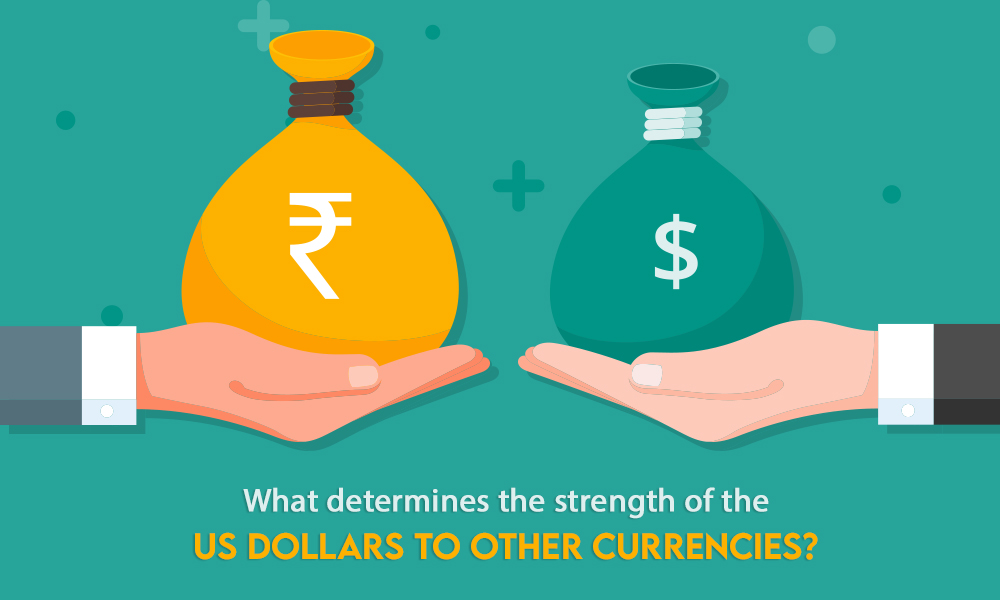 Many investors would be fond of trading dollars rather than preferring other currencies as it has been recognized as the world's reserve currency. In several countries the U.S Dollar has been crowned as their official currency. In this modern world, around 80% of the global trade is performed with US Dollars. But do you know how the US Dollar emerged as the world's reserve currency and what are the factors that determined it?

Now, in this blog we'll discuss the above mentioned queries that help you to understand the evolution of US Dollars in the global market.

HOW US DOLLAR EMERGED AS WORLD'S RESERVE CURRENCY?

As the U.S is backed by the world's largest gold reserves, other countries started to accumulate reserves of U.S Dollars instead of gold reserves. Hence, in order to store their dollars, countries had to purchase U.S treasuries to store their money safely. During the period of Vietnam war, the demand for U.S treasuries deficit by flooding the market with paper money.

The stability of the dollar has been a rising concern and countries chose to convert dollar reserves into gold. Later, the demand for gold surged up that forced the President Richard Nixon to de-link the dollar from gold. Although there have been periods of stagflation, the U.S dollar remains the world's reserve currency.

If you are a trader who has planned to step into currency trading, then it's time for you to know about 500 per crore. 500 per crore is one of India's best trading platform and offer expert strategies to the investors who choose to trade with them. To know more about 500 per crore, click here!

Here, we'll now discuss about the essential criteria that determines the strength of the U.S Dollar:

Every nation would have imposed its monetary policies to improve the economic growth and currency value, and to overcome the fiscal problems. Tight fiscal discipline and anti-inflationary monetary policies have been adopted to promote the strength of the U.S Dollar.

Stability is the important factor where governments seek for their currencies more than their strength. An investor would consider this factor as it would help them to learn the governments law and history of constructive economic policies that were adopted to regain its stability. In fact, most of the commodities are traded in U.S Dollars.

When you trade with dollars you can enjoy the benefits of making your trade easier by allowing you to invest in U.S treasuries and other global stocks. Trading with currencies is easy but always sell your local currency when it posses greater value than previous days.

Trading in the currency market would require expert strategies, and it's necessary if you seek guidance from experts like 500 per crore. 500 per crore has been offering trading service over a decade and promises to deliver exceptional customer support to its investors.

Open a trading account with 500 per crore today and Avail the Lowest Brokerage in the Industry. Sign up now.